A Drifting Kaleidoscope with Jason Doell 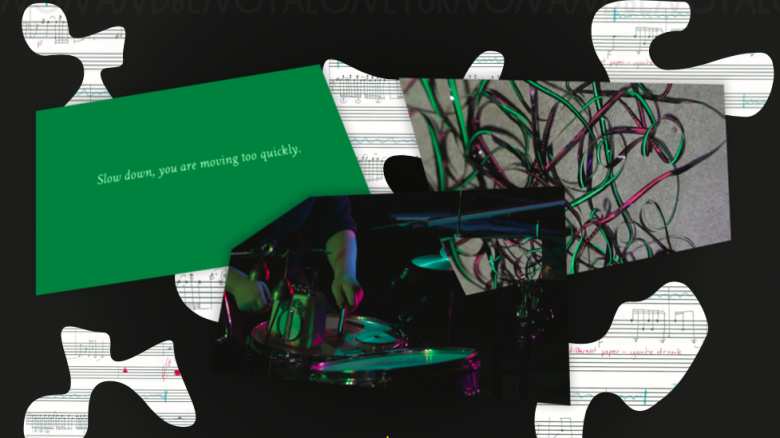 “NOT EVERYTHING YOU SEE HAPPENING AT THE SAME TIME MAKES SENSE.”

On Febraury 3-4 TURNONANDBENOTALONE composed and created by Jason Doell will be streaming at 8PM. This project is a multifaceted experiment in the exploration of sense making. Our Artistic Director, Sanjeet, ~*virtually*~ sat down with Jason to provide context on Jason’s drifting kaleidoscopic art piece and his musings on Mariah Carey, David Bowie and finding meaning in simple truths. The full interview can be listened by members via the soundcloud link below.

Sanjeet: So let’s start off with the title, it’s very cheeky!

Jason: It is cheeky! It spawned out of thinking about connections to music. It comes from being fifteen/ sixteen and listening to David Bowie’s Rock and Roll Suicide. At the end, the forth wall breaks and he tells the listener, ‘you’re wonderful,’ ‘reach out your hand’ and ‘turn on and be not alone.’ So I stole that as a way to organize in those initial days of planning.

For granting you often box your thinking in, or frame your thinking a little bit so you know what the project is. The title doesn’t really make sense anymore but it also does connect to the core central “themes.” If in a world where there is a mess of things coming at you that might be incongruent or irreconcilable or contradictory you still have to hold this as being true as a process of meaning making. For me as soon as I have a meaning for something I feel like I’m not alone.

J: I met him once! was an intern at MetalWorks when I was 18 and it was truly a shitty internship. I was about to leave on a trip and the Assistant Studio Manager said I had to be there next week. I asked why and they just typed out ‘David Bowie.’ When he arrived the Studio Manager put his arm around Bowie and introduced him to everyone except me, the intern. Instead of walking past, David Bowie put down his suitcases and put out his hand and said ‘Hello my name is David.’ I sort of carried that  idea of treating everyone with respect with me after seeing it modeled from such a high point.

S: That exactly what you hope David Bowie stories to be like. I’ve started watching Twin Peaks with my partner and the Twin Peaks movie has David Bowie in a 30 second cameo, which no one but Bowie could truly do.

J: It’s funny that you bring that up,  because there’s stuff about David Lynch that I love and Twin Peaks season 3 was one of the weirdest things I’ve ever seen. I’m not saying anything I’m doing is like David Lynch but he brings irreconcilable things together.  Leaving you in places where it’s not easy, there’s no 1:1 relationships, you don’t know exactly what going on and you’re left with parsing it.

The full audio interview is available for members only. Become a member today.

“AS SOON AS I HAVE A MEANING FOR SOMETHING, I FEEL LIKE I’M NOT ALONE ANYMORE.”

S: There is that interesting thing, the juxtaposition between the ungodly and the salt of the earth human interaction. Which is a great segue to my next question. You describe the project as an exploration in sense making. How did you navigate that journey?

J: The idea came up through big conversations, like the environmental damage that McDonalds does through big industrial farming.  Folks that might say something like that don’t have McDonalds in their community. I’ve spent most of my 20 years in Toronto in Parkdale. For me McDonalds there (RIP) has always been a vital community space where low income families can go and get nourishment, and single parents could go and feed their kids on the way to school, and houseless folks could go and drink coffee on winter days. These things while incongruent or irreconcilable and both true. A lifetime of thinking about all these different truths, I feel in a place and time now where it’s my responsibility to be able to hold as many of these truths as possible and ask why.

S: I’m guessing a big component of exploring truthiness was in choosing the artists to work with. How did you decide who to work with and what made you inspired to work with the people you did?

J: I haven’t really thought about how much of a spectrum collaboration is. It was all people that I really wanted to work with that I love and have worked with in other capacities before. They are people who I appreciate what they do, not only artistically but also out in the world.

S: Do you feel like you’ll be transitioning your work towards more of the “unanswerable questions” for the future?

J: Coming into this project, I’d been thinking a lot about all the different aspects of my creative life that had accidentally segregated into streams. I’ve been thinking about how I can reconcile all of these. Do I keep them as separate streams that I do? Or should I try to bring them together? Most of what I do is in this presentation for the first time in one space. One thing that is in this piece that I’ve done a lot is putting Mariah Carey’s voice into my piece’s compositional structure. As if evoking the spirit of, sort of séance, summoning of Mariah Carey.

S: The summoning of Mimi!! I actually notice on the site that you added notes and memories from the production. Do you have prompts or reminiscence for the audience?

J: We’ll leave it at that! My intention was to flood the context, give ideas of the production of things, influences, inspirations that bring light into the process. I’m curious to see where the audience will go.