“I SEE MYSELF AS ANOTHER STORY TELLER, JUST ONE WITH A HYBRID IDENTITY.”

On Febraury 20, the performance of Ami Dang and Gudiya, curated by Pratishtha Kohli will be streaming at 7PM. As new AD, this project hits very close to home as it’s the first professional work I have done working solely with Indian women. The interview went off the rails and became a conversation between old friends, even though we just met. There is so much heart here, and I have no doubt this performance will make me weep.

Starting off with the BRILLIANT curatorial perspective of Pratishtha (full interview can be listened by members via the soundcloud link) it’s followed by a very personal chat over a ~*virtual chai*~ with Ami Dang, experimental electronic sitar player and Gudiya, an artist dedicated to warping nostalgia.

Pratishtha: This particular curation is very much about questioning oneself and introspection. Where do we come from? Where are we now? What bridges those gaps? What are we complicit in and what do we uphold? How are we engaging to dismantle our own beliefs? That came from a perspective academically. My research is on indigenous education theory, especially looking at the role that South Asian diaspora play in being impacted by, yet upholding colonial values.

When you look at the music that Ami engages in, when you look at the music that Gudiya engages in, there’s taking sounds that are familiar and distorting it. You’re putting a lens on the childhood and religious sounds we grew up with but through electronics and distortions. You are forcing people to slow down, break it apart and question what makes this nostalgic. Can we live in just nostalgia?

The full audio interview is available for members only. Become a member today.

Ami: I grew up playing sitar and learning Hindustani or Indian classical music, and also Sikh music, so a lot of my musical education was through the Sikh community. That was always a pretty big part of me until I started to question it. I think my work is so much about the advancement of culture. The moving forward of culture while still honoring the past or referencing the past/ tradition.

That manifests for me in a lot of ways. The Music gallery performance has a lot of pieces from my 2019 album Parted Plains, which is a reinterpretation of Punjabi folk tales translated to English by this British woman named Flora Annie Steel,  and stories from 1001 nights.

I reflected on the fact that I was reading these in English by British story tellers and just thinking about how their interpretation of the “other” plays into their mode of storytelling.  What western attitudes are they pandering to in these stories?  I wanted to decolonize those translations further and make my own soundtrack or imagined score. Culture is constantly translating itself. I see myself as another story teller, just one with a hybrid identity.

Sanjeet– I can relate. I grew up Sikh as well, and really pushed the culture and religion away because of some of the backwards viewpoints I associated with it. As I got older I started to learn about Sikhism but was hindered by the fact I didn’t know Gurmukhi. Almost all the academic learning I have about my religion is through translated pieces, often by white people.

Gudiya– It felt like a similar path for me. I grew up here in America, my dad is Hindu Punjabi and my mom is Catholic Goan. There were always a lot of mixed narratives at home and growing up I loved so much of the culture of India. And then in grade school, more and more I began to hate being a brown person, I started to think ‘everything would be fine if I was white, all of my problems will be gone.’ It wasn’t until university, when people were bumping up POCs that I started to feel better about my Indian identity. When I went to India alone for the first time in 2016 and I started to see more clearly how my family is privileged because of my upper caste Dad. I saw a lot of the same problems of the west existing in the east. It made me realize that everyone just sucks, I felt like I wasn’t really represented anywhere. It wasn’t until finding other queer South Asian people, musicians, weird anarchists that I felt like I had community.

Sanjeet- It’s funny how the story is so consistent across my SA peers. It wasn’t until I moved to Oakland and met my best friend Meghna, a badass queer Tamil Indian woman that I saw myself in my community for the first time. Someone who wore whatever they wanted to and told their annoying Aunties to piss off. The dichotomy goes further when you then become Indian women in music. How have the two of you navigated being in clubs and spaces where you are not just the person sneaking in to the party, but the person on the stage?

Gudiya- It’s sick, I love being on stage haha. And I always hope there is also another South Asian person in the crowd saying, “that’s going to be me!” because that’s’ how it happened for me. I saw Asmara perform (she’s so cool!!!) and it inspired me.

Ami- Yeah it’s been a journey for me. I started playing shows a long time ago. In those times, there were few women on the bill, and I was definitely the only woman of colour for a long time. So I feel like it’s only been the last few years where I’ve seen diversity on stage and in the crowd. To me we have so much work to do still, but it has been really re-affirming to see the change happen. Gudiya and I played together over a year ago, and I didn’t expect it at all. It was so so amazing.

Gudiya- That was a great show, I loved that show. 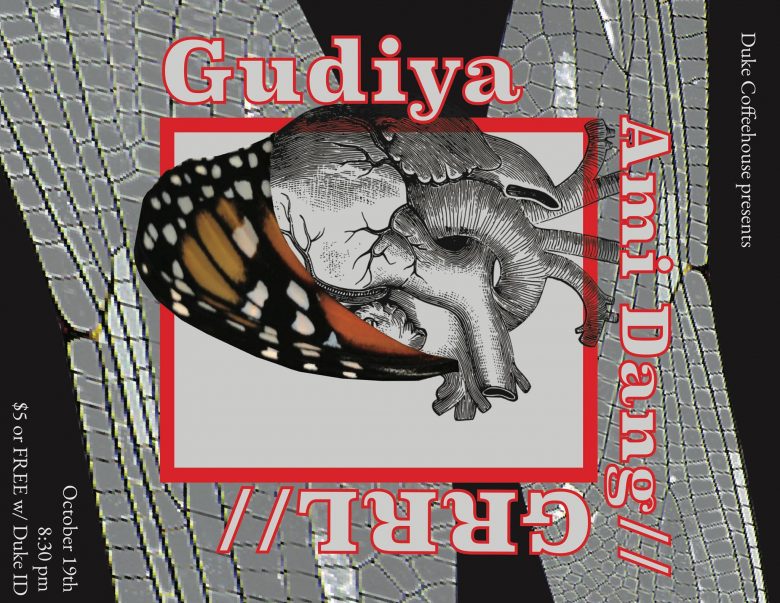 Sanjeet- What if when we open up, everything is the exact same, or worse! How do we control that? How do we march forward and have queer SA representation?

Gudiya- I have so many schemes, I think everyone being online has opened up a lot of things. People are being critical of their lives and pursuing their passions, including myself. I think the way we used to set up events doesn’t allow a lot of entry points and time for conversation. It’s scary to go to events if you don’t know anyone there. I think that having more online events, especially ones that allow for discourse and skill sharing will change things.

Ami- I think what you’re saying is so valuable. With the switch to things being online, there’s so much more content that is giving a global platform to underrepresented voices. When I tour and there are brown people, especially women and nb folks in the audience. They say ‘oh my gosh, it’s amazing how you’re doing this, I don’t even know how I could do this.’ And I have to remind them they can! Just do it! Make art ! Make it work!

Sanjeet, you touched on something too, the shame we feel. Aunties telling us how to dress or behave. I’ve been criticized by my aunties in my community for touring. The reality is that anything you do that is not traditional is shameful.  And I think the fact that we’re doing more things online is great, its archived.

Sanjeet- I guess a lot less Indian people are sneaking out now to go to shows.

Gudiya-  And a lot of Indian parents are not good with technology!

Sanjeet- Is there anything you want people to know in preparation for your performances? Maybe fuck aunties??

Gudiya- I’ve called this piece Timecheck for a few reasons. I just turned 25, and it felt like a huge milestone for me. I’ve been thinking a lot about where I am and how I got here. Appreciating the past, the hardships and regret, and being comfortable with that being a part of who I am right now. This is my first full length, original composition and I’m excited for people to watch the video!

Ami- I’m so excited that the two of us are on this lineup and it’s cool that this can happen all the time now. For me I’m trying to decenter our western canon. Its also really interesting that we’re both solo artists which is super empowering. But something I always come back to is why am I a solo artist? While that is empowering, I also feel like that stems from an isolation I felt when I developing my work.

Sanjeet- That’s so brilliant to bring up. Every artist that I can think of that’s a woman or nb Indian is a solo artist. Very few are in a band.

This is when the recording was stopped , we talked the evil eye, politics and decided to start up an Indian women, trans and non-binary music Discord. Email sanjeet@musicgallery.org to join!